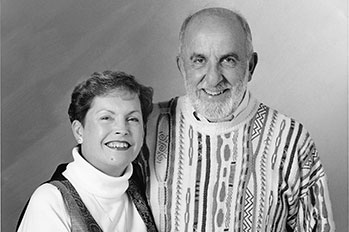 Don Romanaggi’s name would have been indelible at the University of Portland even before it was affixed to Old Science Hall in foot-high bronze letters: as a stellar student, a committed alumnus of the class of ’56, a dedicated regent, a stalwart fan of Pilot athletics, and a remarkably generous and creative benefactor.

Don is a fervent believer in funding gifts with the IRA charitable rollover and since 2006 has given us many such gifts. With the IRA rollover, funds are transferred directly from the IRA to the charity and thus do not count as income for the donor, reducing income tax in the year of the gift.

“It just makes sense financially, and it’s easy to do,” Don says.

The story of Don’s deep commitment to the University began with the lovely story of his romance with the beaming freshman girl he met on campus in 1955; her name was Agnes Stoffel—and they enjoyed nearly fifty years together, raising their children and pouring their energies into the University they loved until Agnes died in 2008. Born and raised in Portland, Don graduated from the University in 1956, earned his medical degree at Loyola University in Chicago, and returned to Portland to practice, specializing in immunology and the treatment of allergies and asthma.

Even in the midst of a very busy practice, Don found time to help the University in many areas—creating scholarships for students, contributing early and often to Pilot athletics, contributing generously to engineering efforts, and most notably to the stunning growth among the sciences at the University. Don and Agnes were key donors to Swindells Hall and were among the first donors to the Father John Molter, C.S.C., Chair in Science.

Don and Agnes also were the major donors to the Old Science Hall that in November 2010 was renamed Romanaggi Hall. The gift helped fund new windows throughout, renovation of the third floor, roof improvements, and the first thorough cleaning of the building’s masonry in seventy years. The Romanaggis also made an estate-planning gift to provide continued maintenance of the building.

University president emeritus Father Bill Beauchamp is even more direct: “Don and Agnes’s love for the University where they met has led us to a whole new vision of what this institution can be.”

To celebrate a brilliant man who has never forgotten the University he loved, and to celebrate also his late wife whose wit and humor will never be forgotten on The Bluff, the University in 2011 presented an honorary doctorate of public service to Dr. Don V. Romanaggi.